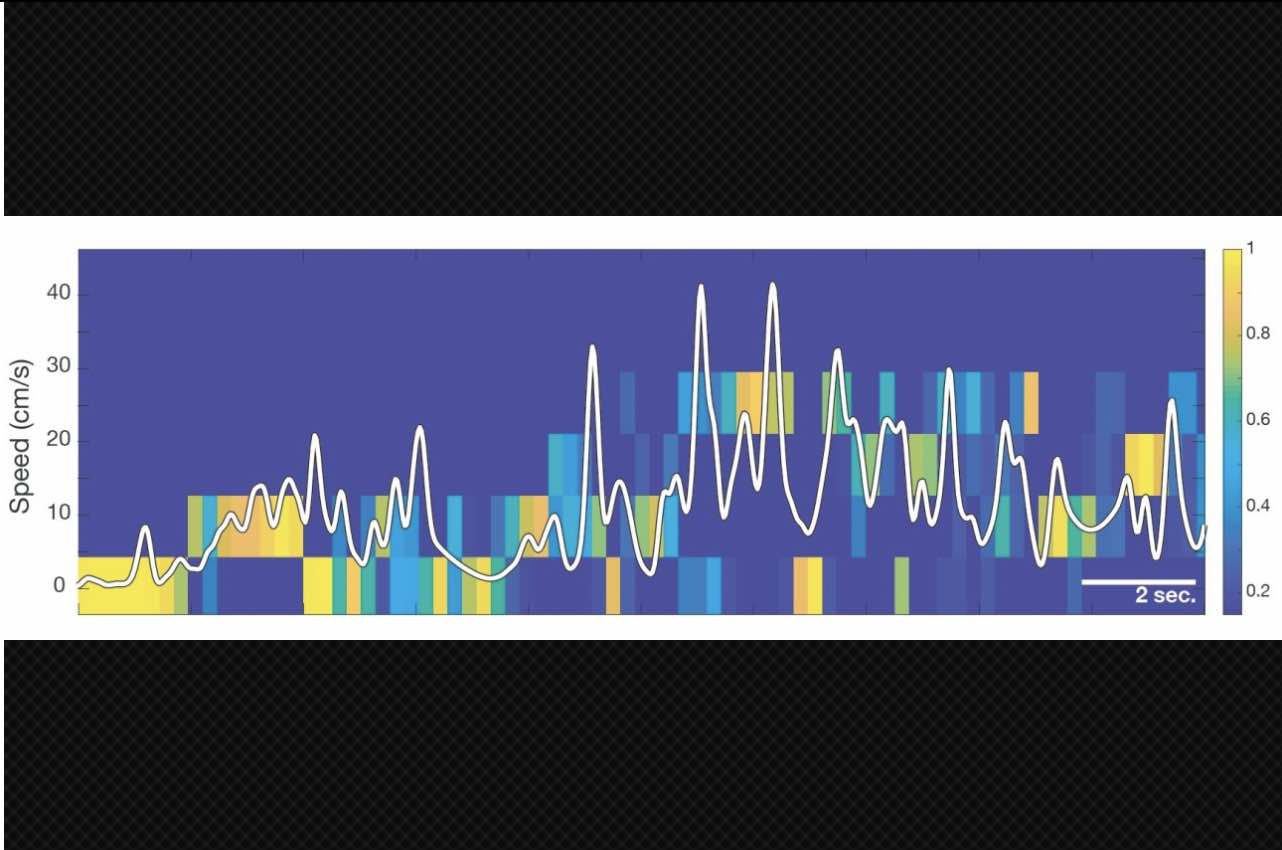 Our everyday lives rely on planned movement through the environment to achieve goals. A new study by MIT neuroscientists at the Picower Institute for Learning and Memory at MIT identifies a well-connected brain region as a crucial link between circuits guiding goal-directed movement and motivated behavior.

Published Sept. 19 in Current Biology, the research shows that the lateral septum (LS), a region considered integral to modulating behavior and implicated in many psychiatric disorders, directly encodes information about the speed and acceleration of an animal as it navigates and learns how to obtain a reward in an environment.

“Completing a simple task, such as acquiring food for dinner, requires the participation and coordination of a large number of regions of the brain, and the weighing of a number of factors: for example, how much effort is it to get food from the fridge versus a restaurant,” says Hannah Wirtshafter PhD ’19, the study’s lead author. “We have discovered that the LS may be aiding you in making some of those decisions. That the LS represents place, movement, and motivational information may enable the LS to help you integrate or optimize performance across considerations of place, speed, and other environmental signals.”

Previous research has attributed important behavioral functions to the LS, such as modulating anxiety, aggression, and affect. It is also believed to be involved in addiction, psychosis, depression, and anxiety. Neuroscientists have traced its connections to the hippocampus, a crucial center for encoding spatial memories and associating them with context, and to the ventral tegmental area (VTA), a region that mediates goal-directed behaviors via the neurotransmitter dopamine. But until now, no one had shown that the LS directly tracks movement or communicated with the hippocampus, for instance by synchronizing to certain neural rhythms, about movement and the spatial context of reward.

“The hippocampus is one of the most studied regions of the brain due to its involvement in memory, spatial navigation, and a large number of illnesses such as Alzheimer’s disease,” says Wirtshafter, who recently earned her PhD working on the research as a graduate student in the lab of senior author Matthew Wilson, Sherman Fairchild Professor of Neurobiology. “Comparatively little is known about the lateral septum, even though it receives a large amount of information from the hippocampus and is connected to multiple areas involved in motivation and movement.”

Wilson says the study helps to illuminate the importance of the LS as a crossroads of movement and motivation information between regions such as the hippocampus and the VTA.

“The discovery that activity in the LS is controlled by movement points to a link between movement and dopaminergic control through the LS that that could be relevant to memory, cognition, and disease,” he says.

Wirtshafter was able to directly observe the interactions between the LS and the hippocampus by simultaneously recording the electrical spiking activity of hundreds of neurons in each region in rats both as they sought a reward in a T-shaped maze, and as they became conditioned to associate light and sound cues with a reward in an open box environment.

In that data, she and Wilson observed a speed and acceleration spiking code in the dorsal area of the LS, and saw clear signs that an overlapping population of neurons were processing information based on signals from the hippocampus, including spiking activity locked to hippocampal brain rhythms, location-dependent firing in the T-maze, and cue and reward responses during the conditioning task. Those observations suggested to the researchers that the septum may serve as a point of convergence of information about movement and spatial context.

Wirtshafter’s measurements also showed that coordination of LS spiking with the hippocampal theta rhythm is selectively enhanced during choice behavior that relies on spatial working memory, suggesting that the LS may be a key relay of information about choice outcome during navigation.

Overall, the findings suggest that movement-related signaling in the LS, combined with the input that it receives from the hippocampus, may allow the LS to contribute to an animal’s awareness of its own position in space, as well as its ability to evaluate task-relevant changes in context arising from the animal’s movement, such as when it has reached a choice point, Wilson and Wirtshafter said.

This also suggests that the reported ability of the LS to modulate affect and behavior may result from its ability to evaluate how internal states change during movement, and the consequences and outcomes of these changes. For instance, the LS may contribute to directing movement toward or away from the location of a positive or negative stimulus.

The new study therefore offers new perspectives on the role of the lateral septum in directed behavior, the researchers added, and given the known associations of the LS with some disorders, it may also offer new implications for broader understanding of the mechanisms relating mood, motivation, and movement, and the neuropsychiatric basis of mental illnesses.

A National Defense Science and Engineering Graduate Fellowship and the JPB Foundation funded the research.