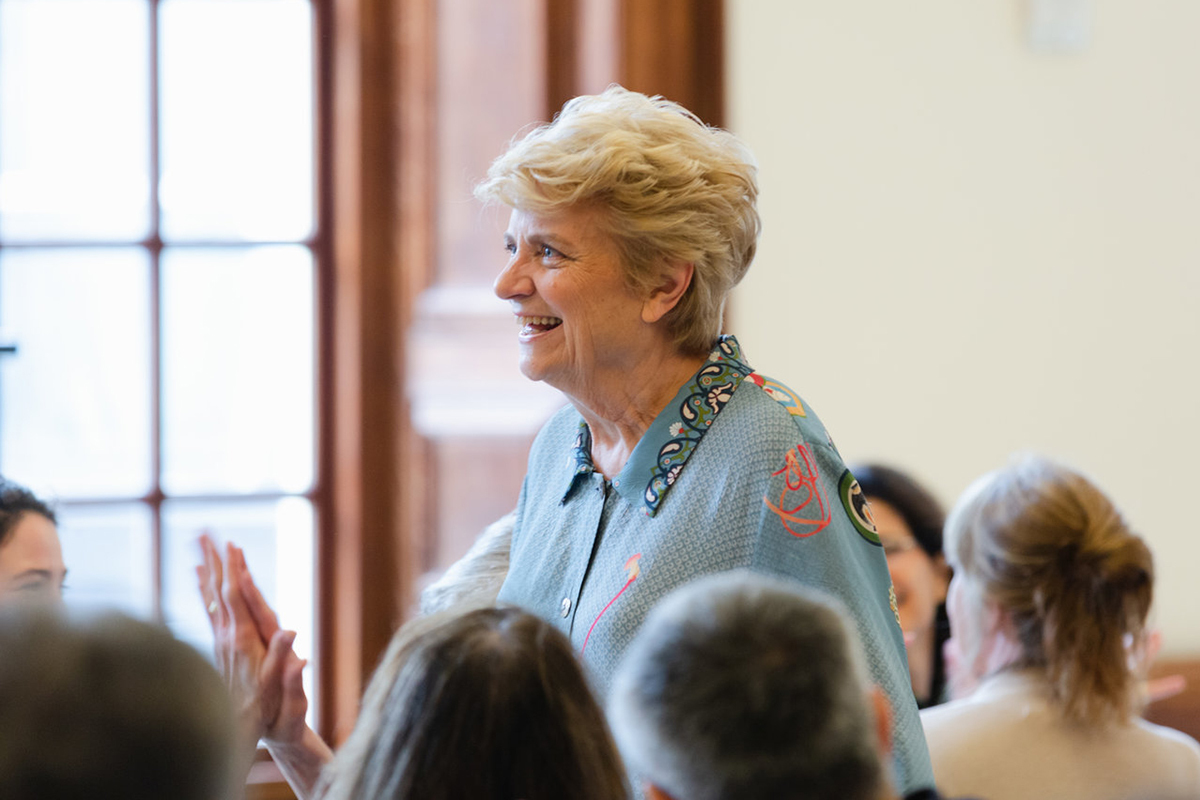 Molecular biologist and professor emerita advocates for more inclusive science and advises how to get there.

Over the course of her exceptional career, Amgen Professor of Biology Emerita Nancy Hopkins has overturned assumptions and defied expectations at the lab bench and beyond. After arriving at MIT in 1973, she set to work mapping RNA tumor virus genes, before switching her focus and pioneering zebrafish as a model system to probe vertebrate development and cancer.

Her experiences in male-dominated fields and institutions led her to catalyze an investigation that evolved into the groundbreaking 1999 public report on the status of women at MIT. These findings spurred nine universities, including MIT, to establish an ongoing effort to improve gender equity. A recent documentary, “Picture a Scientist,” chronicles this watershed report and spotlights researchers like Hopkins who champion underrepresented voices. She sat down to discuss what has changed for women in academia in the last two decades — and what hasn’t.

Q: How has the situation for women in science evolved since the landmark 1999 report?

A: It’s hard today to remember just how radical the 1999 report was at the time. I read it now and think, ‘What was so radical about that?’

The report documented that women joined the faculty believing that only greater family responsibilities might impede their success relative to male colleagues. But, as they progressed through tenure, many were marginalized and undervalued. Data showed this resulted in women having fewer institutional resources and rewards for their research, and in their exclusion from important professional opportunities. When the study began, only 8% of the science faculty were women.

When the report became public, the overwhelming public reaction made clear that it described problems that were epidemic among women in science, technology, engineering, and mathematics (STEM). Former MIT President Chuck Vest and Provost Bob Brown addressed gender bias for all of MIT and “institutionalized” solutions. They established committees in the five MIT schools to ensure that inequities were promptly addressed and hiring policies were fair; rewrote family leave policies with input from women faculty; built day care facilities on campus; and recruited women faculty to high-level administrative positions.

Today, we realize that the MIT report elucidated two underappreciated forms of bias: “institutional bias” resulting from a system designed for a man with a wife at home; and “unconscious or implicit gender bias.” Voluminous research by psychologists has documented the latter, showing that identical work is undervalued if people believe it was done by a woman. Refusal to acknowledge unconscious gender bias today is akin to denying the world is round.

Q: What do you hope people will take away from the “Picture a Scientist” film?

A: I hope people will better understand why women are underrepresented in science, and women of color particularly so. The film does a terrific job of portraying the range of destructive behaviors that collectively explain the question, “Why so few?” The movie also focuses on the courage it takes for young women scientists to expose these problems.

I hope people will agree that, despite all the progress for women in my generation, as the bombshell report from the National Academy of Sciences documented in 2018, sexual harassment and gender discrimination persist and still require constant attention. It remains a challenge to identify, attract, and retain the best STEM talent. And, as the movie points out, it’s critical to do so.

The producers have received an unprecedented number of requests to show the documentary in institutes, universities, and companies, confirming that underrepresentation remains a widespread and pressing issue.

Q: Where do we go from here? How can academia better support underrepresented groups in science moving forward?

A: People often say you have to “change the culture,” but what does that really mean? You have to do what MIT did: look at the data; make corrections, including policy changes if necessary; continue to track the data to see if the policies work; and repeat as needed. Second, as the National Academies report points out, you must reward administrators who create a diverse workplace. Top talent is distributed among diverse groups. You can only be the best by being diverse.

But how do you change the behavior of individual faculty? Years ago, President Vest told me, “Nancy, anything I can measure I can fix, but I don’t know how to fix marginalization.” His comment was prescient. We’re pretty good at fixing things we can measure. But not at retraining our own unconscious biases: preference for working with people who look just like us; and unexamined, biased assumptions about people different from us. But psychologists tell us all we have to do is ‘change the world and our biases will change along with it.’  Furthermore, they now have methods to measure change in our biases.

I championed this cause because I believe being a scientist is the greatest job there is. I want anyone with this passion to be able to be a scientist. I’m grateful I got to see change first hand. I just wish the change was faster, so young women like Jane Willenbring and Raychelle Burks in the movie can just be scientists.