A Summer of Science 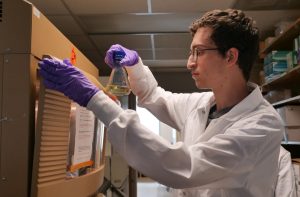 Victor Rivera-Santana, a chemistry major at the University of Puerto Rico at Mayagüez, visited MIT Biology for 10 weeks to investigate protein form and function.

Victor Rivera-Santana grew up on the western edge of Puerto Rico, in what he refers to as an “atmosphere of science.” His mother is a professor of animal science at the University of Puerto Rico at Mayagüez, and in elementary school he would attend her lectures about the effects of environment and hormones on animal behavior. Three years ago, Rivera-Santana enrolled there as an undergraduate, and has been studying chemistry ever since — with the exception of this past summer, when he became a full-fledged member of the MIT Biology Department for 10 weeks during MIT’s Summer Research Program in Biology (MSRP­-Bio).

Rivera-Santana remembers being drawn to basic research because of its simple, pure, and noble nature, stemming from the creativity of the researcher. “Science almost always has an application, so the fact that researchers in basic science are not looking for an application per se doesn’t mean their work won’t have one in the future,” he says. “The researcher fulfills his or her own curiosity, and afterwards someone else can find a way to put that into practice in society.”

A rising senior, Rivera-Santana chose chemistry because he enjoyed analyzing the minute building blocks of life, but wasn’t sure which field he would ultimately pursue. With chemistry, he could engineer the major to encompass biology and physics as well, which would give him “a taste of everything.”

At first he didn’t know what post-graduation life might hold. However, two weeks into the MSRP-Bio program he’d made up his mind: a PhD. “I like the people, I like the passion, and most importantly I like the research — everything is so interesting it’s hard to pick,” he says.

Rivera-Santana applied to MSRP-Bio early last January because he had it on good authority from three independent sources that this was the program for him. First a good friend and former MSRP-Bio student suggested it, then his professor, and finally his father.

He had two main expectations coming in. First, that everyone would be intimidating and aloof. “Boy was I wrong,” he says. “The MIT faculty are really accessible and engage you as a potential researcher. You can stop them as they’re walking down the hall, or ask them questions during the scheduled Q&A sessions.”

Second, he expected everyone would be hardworking, irrespective of their area of focus. “I was very pleased to find that’s the case,” he says. “I have not met one person at MIT who would not go the extra mile to do their job correctly.”

Rivera-Santana worked in Thomas Schwartz’s lab, investigating an aggregate of proteins known as the nuclear pore complex (NPC), which is embedded in the nuclear envelope and controls the passage of proteins, RNAs, and even ribosomal subunits between the cytoplasm and the nucleus. Although the NPC is vital to cellular survival, its structure is not yet fully understood.

The Schwartz lab goes bit by bit, studying each of its components and their interactions with one another. Rivera-Santana concentrated on one NPC protein in particular, Nup93, parsing its role and design. He hopes this work will eventually help scientists understand the complex as a whole, “because as the name says, it’s complex.”

Rivera-Santana studied four different variants of Nup93, working to express each variant by itself in bacteria. Most of his days in lab went by “either very slowly or very quickly.” He would spend the beginning of the week growing the bacteria to express his proteins — a relatively low-key process since the bacteria “essentially take care of themselves.” The latter half of the week, though, when he began the purification process, was more fast-paced. It involved extracting and purifying the proteins from the bacterial cytosol, while at the same time taking steps to prevent the proteins from becoming damaged, such as keeping them at low temperatures by performing the purification steps in the cold room.

“Purifying is the really challenging part, but it’s also the most fun,” Rivera-Santana says. “I had to work at four degrees Celsius, and I’m from Puerto Rico so you can just imagine how I bear the temperature,” he adds.

Looking back, his most exciting summer experience was purifying his first protein. “I just felt this bundle of joy well up inside me,” he says. “When I ran it through the gel to check its identity and I saw that beautiful blob of ‘ink’ that told me I had my protein, I just felt so happy.”

While Rivera-Santana thoroughly enjoyed his experiences in lab, he was also thrilled to meet other budding researchers and explore Boston’s museums and brick buildings. His proudest moment was cooking his first meal for his new MSRP-Bio friends (a classic Puerto Rican dish: rice, beans, chicken, and plantains). He enjoys putting smiles on people’s faces, “especially when those grins are full of food.” After all, MSRP-Bio isn’t just about being at MIT; it’s also about meeting people and being part of the community.

He also learned he could live by himself, thousands of miles from his family. And he’s prepared to do it again next summer, perhaps in the same lab. “I’m definitely considering doing MSRP-Bio again,” he says. “And I’m certainly also thinking about MIT for graduate school.”

Until then, the three things he’ll miss the most — in no particularly order — are his MSRP-Bio cohort, his lab mentor, and the tasty East Coast cherries.